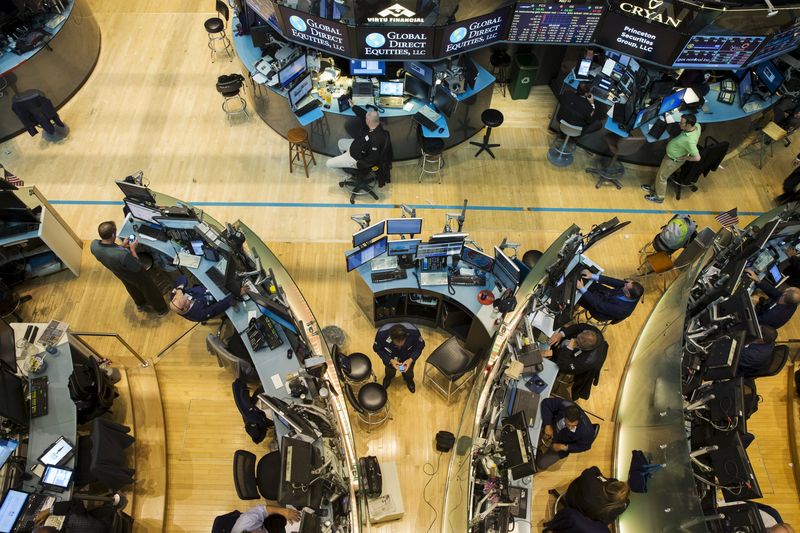 Investing.com — The dollar edges lower after its worst one-day sell-off in months. The debate over inflation and interest rate hikes continues, however, with Philadelphia Fed President Patrick Harker saying he’s open to more than three rate hikes this year and Lael Brainard due in the Senate for her confirmation hearing as vice-chair of the central bank. Delta Air Lines (NYSE:) results may cast light on the impact of a rising wave of Covid-19 cases in the U.S., while another big car plant in one of China’s most important ports shuts down due to you-know-what. Here’s what you need to know in financial markets on Thursday, 13th January.

The dollar stabilized after its , a sign that global markets believe that the risks of tighter U.S. monetary policy are fully priced in for now.

By 6:15 AM ET (1115 GMT), the , which tracks the greenback against a basket of six advanced economies, was down 0.1% at 94.812, after falling more than 0.6% on Wednesday, on growing hopes that inflation may be close to peaking. Figures released on Wednesday had shown, its highest since 1982, but analysts argued that a combination of factors were making the situation look worse than it is.

Talk about tighter policy is unlikely to stop. Philadelphia Federal Reserve President Patrick Harker told the Financial Times in an interview that he’s open to this year, while Lael Brainard’s prepared remarks for her vice-chair confirmation hearing later Thursday stressed the .

Arguably a better measure of current inflation dynamics will be posted at 8:30 AM ET, when the U.S. publishes numbers for December.

U.S. , due to be released at the same time, are expected to have stayed near post-pandemic lows last week at 200,000.

U.S. stock markets are set to open mostly higher later, with risk appetite revived by the latest developments on the monetary policy front.

However, gains may be restrained by the consciousness that the shift in sentiment over interest rates has also been driven by the alarming spread of Covid-19 across the U.S. in the last two weeks, raising the likelihood of a short-term drag on growth.  earnings, to be released early, may cast further light on that.

By 6:15 AM ET, were up 48 points, or 0.1%, while the contract and the contracts were both up by a similar amount.  Benchmark , meanwhile, appeared to have completed their short-term retracement, edging higher again to 1.75%.

Other stocks in focus may include Robinhood (NASDAQ:), which downplayed an apparently false rumor about it preparing to list contracts in ‘meme coin’ Inu.

U.S. hospital admissions reached a new record high on Wednesday, making it increasingly clear that the greater transmissibility of the Omicron variant is largely offsetting what positives can be drawn from its weaker virulence.

Absenteeism remains an acute issue both in the U.S., which has averaged over 780,000 new cases a day for the last week despite a sharp drop on Wednesday, and further afield: France registered over 360,000 new cases for a second straight day on Wednesday, but is still relaxing travel restrictions with neighboring Britain, thinking that there is no point in adding economic harm to the situation when community spread is already so active.

Covid-related risks also continue to be evident in China, where Volkswagen (DE:) followed Toyota in in the port of Tianjin. Disruptions at the ports of Tianjin, Dalian and Ningbo are leading to increased congestion at Shanghai, the world’s busiest port.

5. Oil hits two-month high as sellers run out of road

Crude oil prices rallied to their highest in two months, helped by a cheaper dollar and by indications that large consumer nations are running out of space to sell from their strategic reserves.

According to Tanker Trackers’ Samir Madani, the latest U.S. Energy Department sale reduces the Strategic Petroleum Reserve’s holdings to less than 100 days of import cover. International agreements require the U.S. and other advanced economies to hold at least 90 days’ worth of imports.

Wednesday’s government data on U.S. inventories, however, showed another large build in gasoline inventories, suggesting that pressure on final demand for fuel is building as the Omicron wave rises.

Dollar Sell-Off May be Losing Steam as EUR/USD Nears 1.15

8 Things To Stop Buying This Year

How to Survive When Stocks Behave Badly

Why You Should Sell Your Bitcoin

How to Survive When Stocks Behave Badly

Jan 25, 2022
The bull market may have swelled the proportion of stocks in your portfolio inordinately. If that’s the case,…

Jan 25, 2022
"The economy and markets are intertwined. A sharp drop in the stock market will impact economic activity. They…

Jan 25, 2022
The euro fell to a one-month low on Tuesday as tensions between Russia and the West over Ukraine drew…

Why You Should Sell Your Bitcoin